SportsPro and NorthStar’s robust and multi-dimensional methodology blends comprehensive data analysis, advanced social media monitoring, economic valuations, and expert and consumer  insights to bring you the definitive ranking of the world’s most marketable athletes of 2022.

We’ve covered all bases around the three pillars of brand strength, audience and reach, and economics. Read on to find out more or watch our short video explainer.

What does 'Marketability Score' mean?

Athletes are ranked according to their ‘Marketability Score’, which is split into three distinct scoring components: Brand strength, Audience and reach, and Economics. These weighted scores have been added together to generate an overall Marketability Score out of 100, with each athlete assigned a proportionate score in relation to the top performer for each metric.

The brand strength score, which carries a maximum score of 20, is determined by individual factors such as an athlete’s competitive performance, citizenship and risk profile.

Audience and reach – with a maximum score of 50 – comprises factors such as brand awareness and focus, follower engagement and demographic reach, and consumer perception and sentiment.

Meanwhile the economics score, which carries a maximum score of 30, goes beyond the traditional financial measure of ROI to assess market demand for the athlete, their proactive engagement with social or environmental issues, and growth potential.

See our example athlete, Sam Kerr, and how the scores breakdown: 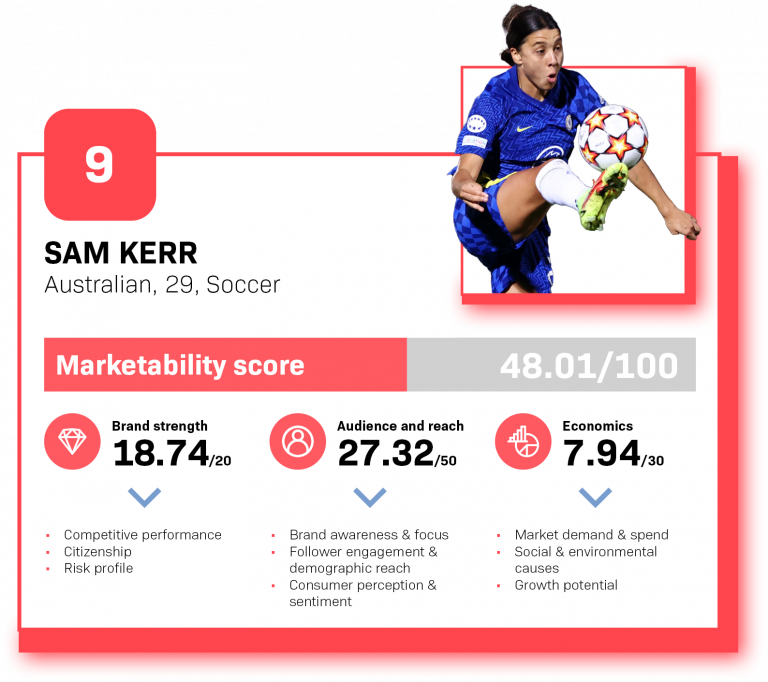 In order to be considered eligible for this year’s list, an athlete must have been active during the evaluation period (1st December 2021 to 31st July 2022) in one of the 24 sports analysed*. They must have also been listed as a primary starter if competing in a team sport, actively training for upcoming Olympic competition, or participating in annual World Championships.

In order to pare down the full eligible athlete population to a plausible list of most globally marketable athletes, a starter list of athletes was compiled based on:

This initial analysis produced a starter list of 700 athletes. Due to the scarcity of comprehensive and holistic athlete data sets, the following screening elements were added to further pare down the list:

This process generated a list of 120 athletes to conduct a full, in-depth analysis, before the above-mentioned scoring model was applied to arrive at this year’s 50 Most Marketable Athletes.

What expertise was utilised to validate the ranking?

To compile this year’s 50 Most Marketable Athletes list, NorthStar led a multi-disciplinary team with expertise in sports, marketing, social, and data science. Specialist data partners D-Tag Analytics, SponsorPulse and Zoomph contributed valuable data and analytics that fed into the scoring metrics and shaped the final ranking. An added layer and acid test of insights from consumers and experts helped ensure the validity and robust nature of the metrics.

How has the scoring evolved for 2022?

This comprehensive scoring methodology is a marked departure from previous editions of SportsPro’s Annual 50 Most Marketable Athletes list. With a view to building the most complete picture of athlete marketability in the sports industry, it combines on-field performance and off-field factors, bringing a new focus on the triple bottom line and a fresh take on what it means to be marketable in the digital age.

In doing so, this year’s list seeks to identify and reflect the key trends, shifts in consumer perception and the most relevant societal values that contribute towards the marketability of an athlete today, such as authenticity, gender equality, diversity and inclusion, and sustainability.

Connecting and inspiring the business world of sport.